A downloadable RunFrigerator for Windows

As a refrigerator it's your sole duty to preserve food,now the food has escaped
and is causing havoc around the world. It's your task to catch the food and
restore balance to the world.

Runfridgerator is a puzzle game in which you make your way through
several obstacles to catch the escaped food.

Navigate through obstacles using Moving Platforms, Boxes and your Carry and Throw abilities.

Watch your surroundings and explore. Food might be hiding everywhere, anxious to get caught.

* Box spawning button should have its own icon

* Pipes need to be added to ALL LEVELS before they're considered "complete". They serve a vital purpose in delivering information to the player, and any level without them will not be being tested properly as a result.

* Stay on target with the "feel" of the game by making sure everyone understands how this game produces challenge and what it should feel like. We're starting to see ideas that deviate from this and they feel out of place.

* You need to define rules and stick to them. One of these I would recommend would be to use slopes any time the player needs to guide an object through a passageway, and to use slopes leading into any button you expect the player to put the ball on.

* Might want to consider how you shape the top of the "tunnel" you put the block in, just to avoid clumsy collisions. Not a major issue, though.

* I should ideally drop the block I'm holding as soon as I go through the blue field? Unless you're planning on using that in a puzzle later ...

* Not sure if it is intentional that, on the second "area", I walked through the lower channel before realising I had to walk the upper channel and float the box through the lower ... but it felt really right when it hit. A lovely example of teaching the player to do (A) then teaching them to do (B) and then giving them a space where they have to put both together.

* Which then led me to do the third area the wrong way around as well, but - again - this sort of misdirection hits differently in a puzzle game than a regular platformer, and I really liked it.

* Can get stuck by leaving the 2nd box at the top and then missing the jump (put another "box spawn" button on the 2nd ledge?)

* The weird trapdoor seems pointless if you don't have the pipes added. Please make sure this is done before testing in future.

* Elevator is not timed to be visible when approaching the gap

* Once at the bottom of the gap, the elevator takes a LOOOONG time to come back, especially since you need to time the jump onto there.

* At the bottom of the elevator - door not aligned with wall, hazard not aligned with floor, floor is inset from wall ... whole level feels very sloppily constructed. Use snapping grids in the editor.

* Interesting idea, but very awkward implementation. Elevator actually moves too fast to manage moving the cube around, and the result is a dexterity challenge jammed into the middle of a mental challenge - feels incongruous and just frustrating. Didn't finish the level.

* Elevator should move slowly, and be activated by a button on top of itself (so it doesn't run away from you when you step off of it). Put a 2nd elevator in for the upper section

* Camera at the start of the level didn't allow me a view of the pusher-platform, leaving me to launch the cube into the off-screen void in the hopes it would be useful ... really bad design. Please make sure that pusher-platform is VISIBLE when it needs to be!

* Box spawner should never be placed over its own button unless you're purposefully creating a loop - that should be a design rule in the site!

* Again, the pipes need to be there - the moving platform's return caught me off-guard and nearly killed me

* Wouldn't this work better if you added a button in a sloped pit, and swapped the cube for a ball? Would prevent all the awkward collisions.

* Not enough information at the opening of the level

* Weird bug - placed the block on the Pad, and there was an invisible collision box left behind when the platform rose up

* Also, after placing the box on the pad I was stuck - couldn't retrieve the box, despite it seeming like it should be in range!

* Not sure what the challenge is supposed to be here? It certainly doesn't seem to build on anything from before.

* You need to have the slope run right TO the button so the ball won't roll off it ...

* Channel under player seems *just* too small for box & ball to pass each other? If this is deliberate, reduce the size of the channel. If it isn't, make it bigger.

* Some clever stuff, but I lost a block on the last leg of the puzzle and, by that point, couldn't be bothered going back to get it again! Consider where checkpoints and box spawners are placed and try to minimise the moving around of the player if you can.

* Don't have objects glitch through each other!

* So many glitchy collisions. If you're using the ball, put in slopes!

* Couldn't figure out the last leg of the puzzle, but also don't put the player in a position to bash their head on the ceiling if you can help it.

* Very easily broke the whole game in a very obvious way - stood on the rising platform and dropped the cube on the button.

* Do something else with the camera, this setup is inconsistent with the other levels.

* Moving platform should have a purple dot on it?

* Buttons in ceiling can't be seen

* If I miss the "spot" with one of the platforms it takes SOOOOO long to loop around and come back ...

Thanks for All the great feedback, I agree with most of it, some points I wanted to make some comments on:

I don't have much more to add than Nick and Steve.

There's definitely some forward motion on the project on display here in the number of situations that are being explored, but - as Nick pointed out - there's a lot of "level rules" you should be laying down. For example, it is FAR too easy to lose blocks and have them fly everywhere. The puzzles that work are the ones that are smaller and more self-contained.

There are some timing challenges and dexterity challenges emerging, which has the potential to produce the "Frankengame" effect where everyone pushes in different directions. Neither direction is bad, but make sure the team are in discussion and stay together with the direction of the project.

Finally ... just make the physics objects a whole lot heavier (or increase gravity). It'll reduce the likelihood of them bouncing around, and they'll feel more satisfying to play with.

And don't design puzzles around glitches or twitchy responses. If the player knows the solution (and your core challenge is mental, not physical) then it's just frustrating to have to sit and attempt it over and over until the physics lines up, or my stupid fingers can time things right.

Thanks for the build!

Ok, there's alot to like here with some idea generation of the 'sort of thing' you could do as this character thats had some crazy features that provide an interesting, if a little fiddley, carry mechanic that's been implemented.

Theres a choice made to work with physics based objects, this brings an element of challenge and skill to master the level designers ideas. Thats a real great place to be as a level designer because your job is to find how to tighten up the core experience to demonstrate the best, or should I say fun, things you can do with these toys.

Now, theres some really interesting elements and puzzles being demonstrated but as with most things its to do with the way we 'stage the scene' to demonstrate and facilitate the players actions. Right now that aspect is somewhat unbalanced and the metrics really need to enforce the parameters you are establishing for the player to follow.

And those physics objects? You the designer need to tighten up the behaviour throughout. As an experience I spent more down time trying to fix the mess I'd created, quite infuriating that can lead the player to disengage from the overall flow.

Pick-ups serve no real service to the players needs. Maybe its the way the actual collection is served (lack of character/animation/feel) or maybe it actually fills up the fridge somehow? I dont know, as a player Im disconnected to these variable's and their setup questions the design behind them. Please develop the collectibles a little more.

What happens as a goal? Maybe think about at least celebrating the players journey and final destination, things should have a bit more spike to at least sync the levels together or present something to celebrate.

So final notes, Im not quite sure what this game is other than you really need to make the feedback on the cool stuff that you are already doing. Tighten it up and series invest a bit more focus on metrics to lock down the framing of the focused experience.

If only you'd spent as much time on the UI as you did on this rather lovely page.

The wording on the mouse controls is obscured by the mouse graphic and it the actual graphic itself bewilders me, is it greyed out if you need to activate it? Just what is going on, I think I need to sit down and have a cup of tea.

Next up, your levels - you have loads of them and to be honest they feel like they've been rushed and have no continuity in terms of difficulty. I would advise you focus on a smaller number of levels and do them well.

The good stuff: I think there's a solid game lurking in here but its well hidden. You need to refine what you have to discover it. The rhythm of the levels need a lot of love, they feel more like proofs rather than something that's made with the player in mind. Shift your focus, reign in you ambition and you could have something special here.

Hello and thanks for the Feedback,

The icon obscuring the text is a definitely a problem, it wasn't picked up until we build because we mostly play in editor mode and there the scaling of the UI is of course different.

It's intressting that you're confused by the Mouse Icons as (if you do a quick search) this is a common way to signify these icons I would say. But it's something I can work on and improve by adding some pulsing graphic.

I absolutely agree with the Level Feedback and some of these levels are not here to stay in my opinion, they are more an exploration of the posibilities.

I'm not sure what you mean with "no devlog" we did have a devlog for week 3 and we will publish a new one on thursday along with a new build.

As for the feedback on the flying bug and the missing moving platforms please have a look at the following video: here.

In short the bug is fixed and will be included in the next build. The moving platforms were there but not very visible, because of the missing background image. 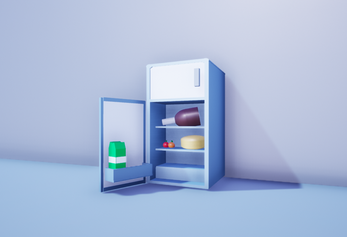