The platformer game where you play as a frog who controls a mech. Yup, a frog in a mech. Now shoot those launchpads, rocket jump up and climb your way onto that big tower. The loot will be worth it... or not, it's about the journey, right?

It's a really nice platform game! Really nice graphics and playability works well. Maybe the respawn button doesn't work perfect because it delay but that's the only problem.

This was a fun game as the character climbs the tower in search of treasure, but finds something that is more fulfilling waiting for them at the very top of the tower.

The visuals are simply amazing and it gives an almost Aztec feel to the tower that seems like it is out in the middle of a desert and the design of the character and the mech also seem really polished too.

The soundtrack that goes along with the game is great , however some of the sound effects like the ones when you pick up an orb could of been better as it sounds like the sound effect used in flappy bird when you pass through a gate but this is only a minor issue.

One of the biggest flaws the game had were the jumping/bouncing mechanisms as when you jumped/bounced it felt like you gained far too much velocity and made platforming more tricky than it needed to be as you over shot the floating platforms with great speeds.

Overall was the game was enjoyable and it makes you determined to get to the top, apart from the minor issues the game itself is solid.I made a 3 part series on my channel featuring the game.

I'm very happy to make the Soundtracks for this game. It was a lot of fun to make these and I really hope you like them. (https://www.youtube.com/playlist?list=PLDFNviNrOXET67JOAdzulWxjHMgBBOypD)

The game itself looks amazing and also plays very well. Although it was not very clear to me what the narrative of the game is supposed to be.

A downside is that when a checkpoint is reached, it will not always spawn you back the right way. This happened a lot and it's really frustrating, because you keep falling into the void instead of spawning back onto the platform. A little variation is also welcome as it becomes very repetitive after a while.

However, I'd still recommend it to others.

The game looks and controls great. Some animations such as the climbing one still needs to be added. And there is a bug that soft locked me.

At the point where you have to jump from platform to platform with the mech suit. I jumped out of the suit as a last ditch effort to save the character. However this put me in a soft lock. The mech suit kept respawning at the location it fell. Meaning it would infinitly reset my game.

The voice could also be a bit louder, as the music seemed to overpower it pretty much all the time. I also had issues with climbing up the vine, most times it would keep me at the top without letting me over the edge.

However the map and design looked great. And the controls feel very good for this type of game. 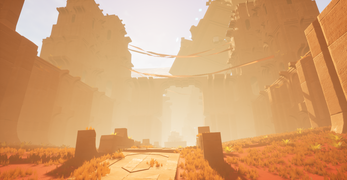 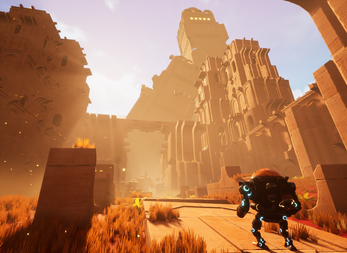 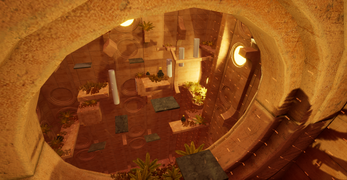